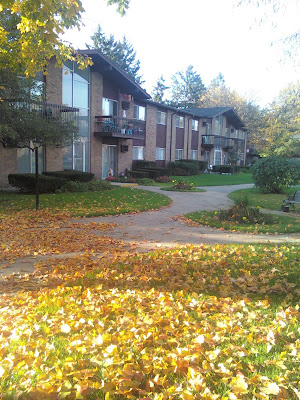 All clocks seem well set around here. The summer has officially left us for this year.

For its farewell event, everything is showered with celebration confetti: Pure drops of rain that borrow the colors of nature, always-welcomed sun rays lazily lingering around, casting cheerfulness on the leaves that announce the tone of the coming season.

And I'm looking ahead...

Posted by Kaoutar at 2:39 AM No comments:


So it’s been a while since I last updated my blog. I even wonder if anybody checks this blog anymore. But today I felt like coming back to say something about…. Life.

Hold on, hold on… in case you're not a fan of those pretentious texts that claim the ability of explaining the meaning of life, let me tell you that I’m not either. Neither am I claiming that I’m bringing up something new here. I’m just writing today to share one amazing almost startling (in a positive way) thing I realized today. This thing made me believe, more than ever before ,that there’s a word that just perfectly describes “life”.

Before we get to the word, let me tell you what happened a little over a year ago. On August 8, 2008 (08/08/08) and - believe it or not - at 8pm, I finally arrived for the first time to my dorm at MSU. All I had in mind were questions, worries, ambitions and hopes. I had thoughts about the people I parted with, and questions about where I would be in a year, in 2 years... But in such moments, you never know for certain, and you never imagine what would happen exactly (and I mean exactly) one year from then.

Well what happened one year from then was this.: OnAugust 8, 2009 (08/08/09) I simply was in Morocco attending the wedding of an extremely special person to me: my friend-sister S. Needless to say, when I parted with her in 2008, the marriage had not been planned. And even a few weeks before the actual wedding, the date was going to be different. But it ended up falling on August 8. Do you wonder where the 8 pm went? Well it was written on the wedding invitation cards! How exact is that?

Now maybe you’re thinking “so what? This is just a coincidence”. Well, maybe. But this just makes me believe that life is nothing but a series of…

For those of us who are waiting for something to happen… let’s just go on with our lives and let the countdown work its way… the "Zero" moment will arrive. We just never know in how much time from now.

S and MR ... may your years together bring along
countless moments of happiness.
Allah y7fedkom :) 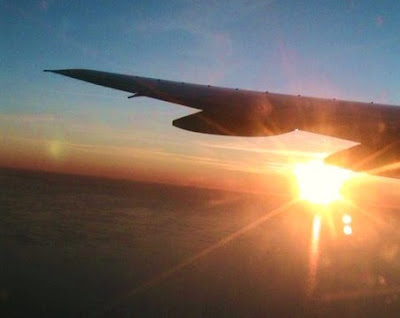 A plane. My second for that day had just set off. From my window seat, I saw beautiful Amsterdam. A river, lakes, green areas and well structured building blocks… then the huge open ocean. The water was seemingly calm, but intimidating. A whole world of mysteries and endless untold stories lying beneath that glittering blue surface, whose uniformity was disturbed by a few dark dots scattered here and there.

That day, I experienced the longest sunset of my life. It literally lasted for hours. My flight which set off at sunset was traveling west, and so was the end of the day. As the arrival of nighttime slowly worked its way westward above the Atlantic, so did our flight. As if we were earning bonus hours on that day. As if the deepest wish of permanently busy people had just materialized. The day lingered beyond the twenty-four hours.

Layers and layers of comfy-looking clouds appeared outside my window. Amazing nuances of pink and purple marked the horizon, an imaginary yet universally referential line somewhere in the air.

From my thousands-of-meters altitude, I thought of how drastically perspective differences can change the way we see things. Just as the usually remote clouds looked fluffy and almost inviting when seen from above. Just like heavy, colossal, roaring ships can turn into mere dark dots scattered here and there on the surface of a blue ocean.

Posted by Kaoutar at 3:45 AM No comments:

Oops, am I losing patience? 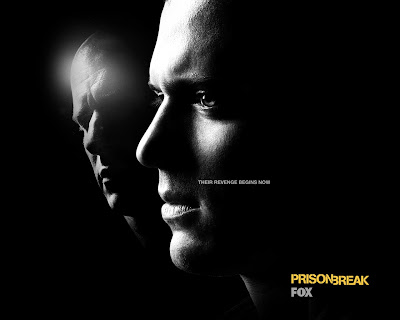 This is a post I started writing today between two class sessions. When I was almost done, I realized that its whole logic is flawed because I am assuming that the return of Prison Break is today but it's in fact on the 17th. I decided to publish it though, because although it is illogical, it does confirm my point: I can’t wait for the return of that TV series :D

April 7th is the day I have been dreading for weeks because that’s the date on which I had to submit a painful 20-page research paper. But April 7th is also a day I have been waiting for for months now. The reason this time has nothing to do with school, but with entertainment. Being a proud Prison Break fan, I was glad that my arrival at the US almost coincided with the start of Season 4. This meant that I would be able to watch the new episodes on the day they are aired on TV, without having to wait for the French version to be made and then purchased by Moroccan TV channel 2M.

But my happiness about Season 4 was cut short when the episodes suddenly stopped last December. Since then, Fox network has been saying on the Prison Break web site that it returns on April 7 (oops 17;)) with all-new episodes.

Anyway, I’m losing patience for sure, but 9 days don’t seem that bad after all. Especially that I will be busy enough with my exams and presentations not to notice how time flies :)

Posted by Kaoutar at 7:53 PM No comments: 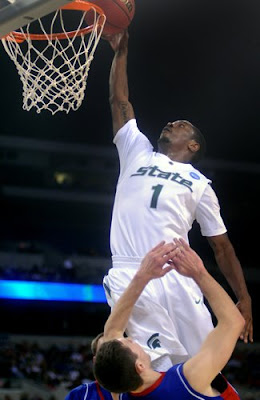 One of the things that I really love about being here is that sense of belonging being an MSU student gives you. Being a Spartan. I myself have paranoid ideas about this sometimes, thinking that it’s just a silly thing that they make you believe in order to make you choose this university instead of another, and then to buy the MSU items once here. It is definitely a successful marketing tactic. But at the same time, I think that it does have a psychological benefit. Probably at least for international students who would need a sense of belonging once they move to a (totally) different culture.

So being a Spartan is of course not present in my mind all the time now. Life goes on normally once you get past the “honeymoon” period that lasts a few weeks after you first arrive here. During those weeks, I was willing to learn the fight song, and was excited at the idea of meeting our cute mascot Sparty. I even put my love for my favorite color (blue) on hold and became a fan of “Spartan Green”. But having spent exactly seven months now, it would take something stronger than just being an MSU student for me to remember that I am a Spartan… and be proud of it.

Yesterday was one of those days when I felt “the spirit”. The MSU men’s basketball team had got to the Final Four in the national championship and won yesterday 82-73 against the Connecticut men’s basketball team, qualifying to the final game! I am not particularly fond of basketball, but being able at least to understand what’s going on during the game (unlike when I watch American football ) I was glad to see our team qualify to the finals.

I also have great respect for the players who are very young MSU students that manage to succeed their course work while devoting so much time and effort for the game.

Anyway, tomorrow is the big day Spartans! We want a Spartan green final! Good luck to you and...

Posted by Kaoutar at 4:16 AM No comments: