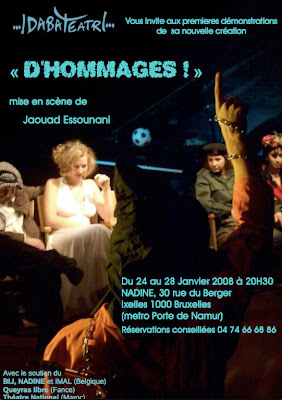 Labels: Have a break, On my computer, Special, Walking outside

Was I expressing amazement just a few months ago about Google and the way we’ve become addicted to it ? How old fashioned any kind of amazement about Google would seem now that newer and revolutionary trends like Youtube, Myspace and Facebook have conquered the net, and with it, our very habits.

Facebook. I first heard of it about a year and a half ago during a casual conversation, when a friend of mine told another that she had forgotten to accept Flana’s invitation on facebook. What did I do then? Did I go straight home, straight to my room, straight to my computer and try to figure out how this thing worked? No. Fortunately I would say now. It was only last September that I stepped in the chaotic world of Facebook.

What Facebook has brought to my life? People would talk about the possibility of keeping in touch! This might be true, but can we still call it “keeping in touch” when it means “hey, here I will put my pictures, describe my mood from time to time, and be tagged here and there, and this thing will do the rest of the job. It will be spying on me all day long and reporting my activities . So just come and look for my news –if you care to "keep in touch" with me of course”!!

Hmmm what alse?? Facebook has also increased my awareness that the world around us is intermingled, a complex network with endless meeting points… A more accurate word for this would be (for Moroccans): mchebbek!!

Here’s a small example from my own account on Facebook: My friend S. whom I’ve just met in turned out to be a friend of A. who’s been a close friend of mine for years now. And A. turned out to be also the friend of the cousin of who is, more than a friend, a sister. F. whom I met at university 5 years ago (outch! I’m getting old!) turned out to be the friend of N, who by the way has just joined a group created by no one but D. whom I interviewed a few months ago when I used to work at Times... Not to talk about a bunch of people whose existence you had forgotten, or who you thought belong to different worlds, and whom you suddenly find gathered as the Admins of the same group… I know it’s complicated and this is my point! (And by the way, I wouldn’t mind if I know that you have skipped this paragraph!) :D

But didn’t you notice something? I used the word “friend” a lot in the last few lines. This brings me to something else about Facebook (and Myspace too, among others). It dilutes some deep concepts like friendship. Anyone anywhere around the globe can become “my friend” just by accepting an invitation which might be sent randomly.

Does this mean that I will stop using Facebook? I don’t think I will. Facebook does keep a group of really special people I have met gathered in one place. So although it does not help me “keep in touch" with each of them, it does allow me… say…. to “hear from them” on a regular basis. But will I become a Facebook-addict? I don’t think I will. Because in this regard, and compared to the chaotic Facebook, my old fashioned Google does win the deal - with excellence!!