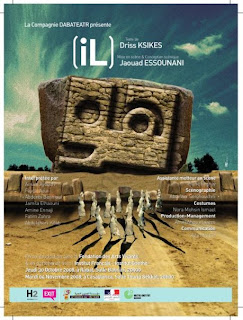 Yup, I made it!! My Integrated Campaigns class was cancelled on Thursday so that we all manage to attend Obama’s speech at MSU’s Adams Field. The event was huge and thousands of people started lining up as early as 8:30 am, while the speech was due to start at 2:30 pm!!

Because of an earlier class and a workshop, I joined the line at 1:30 pm… and reached the gate half an hour later… and I, it goes without saying, was not the last one in line. Just a few minutes after I joined, hundreds were behind me. 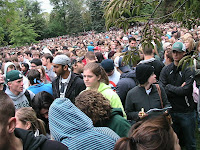 After security check, I and my friends from Kazakhstan and Taiwan entered the field, and got that feeling of being lost in an ocean of people. Later I read in the newspaper that the number of students and local residents who gathered there was estimated at 20,000! So this explains why all we could see when we got there was… the backs of the people in front of us… and the heads of those in front of them at the best of cases. 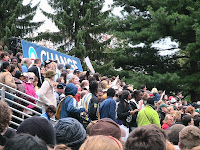 Honestly we played unfair a little bit and started sneaking a few meters ahead… as long as people were not reacting negatively, we kept moving ahead: D After losing our Taiwanese friend in the crowd, I and the Kazakh student reached a place from where we still could see only backs and heads… but where my beloved camera, when lifted very high and zoomed, could catch the speaker’s place :D So when Obama was finally on stage, we spend most of the time watching him on the screen of my camera :D:D:D

I cannot tell you how loud and passionate the crowd was when Obama showed on stage. You would think that all MSU and the surrounding area are only made up of Democrats. But that’s not a hundred percent true. There must be people who came there just out of curiosity, others who, like me and my friends, can’t even vote but came to be part of the event, and those who are in fact Republicans, and were there to know what McCain’s opponent had to say. Talking about these, it was fun to see that at the entry of the field, some McCain supporters had lined up lifting signs supporting their candidate... although, ironically, McCain’s campaign officials declared late Thursday that he has given up on Michigan State!!

Now what was the speech about? It was mainly about economy. This issue addressed the residents’ main concern given the current economic crisis in the US and the whole world, and more than that, given that Michigan is one of the states that cannot boast a strong economy. (This state has the highest unemployment rate in the US: 8.9%). 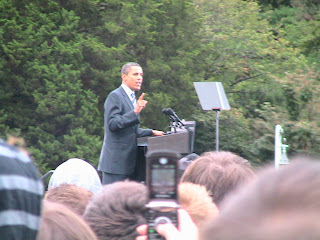 Obama also presented some broad lines of his agenda: Fixing the deficient health care system, creating new jobs, developing the quality of education, AND a point which perfectly matches the spirit of our green university: investing millions of dollars to develop sustainable energy (wind, solar…) AND … ladies and gentlemen: end the US dependence on foreign oil. Even if these two last points were the only things Obama would achieve during his mandate, I would pray day and night for him to be president of the USA, because this would avoid a lot of calamities around the world.

Anyway, I don’t know what would be the impression I get if I attended a similar speech given by McCain. (Hmmmm although I’ve got an idea about that when I watched his September 26 debate with Obama…). But what I can say for sure is that Obama is definitely a good speaker… and seems to be a serious, hardworking person… that is if enough Americans trust him next November and give him the chance to prove it!

Labels: Clicks 'n Pics, I have been there..., Spartan Green life 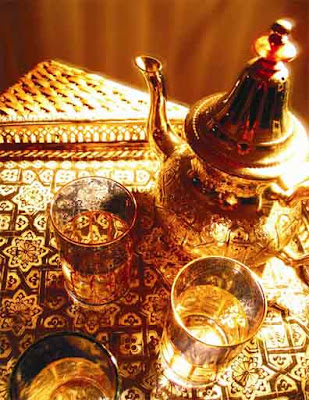 The color of my tea this morning was not echoed by brownish Moroccan crepes and cookies. Instead, I have had some colorful M&Ms and guess what... Sushi for this Eid :)

I have enjoyed my special meal today... keeping in the back of my mind the sweet vision of a warm Moroccan cup of tea, lighted by the smiles of those I love...

Posted by Kaoutar at 2:48 PM No comments: