Back to al akhbar... in English! 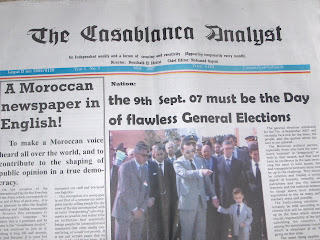 I was really glad to get the news: Morocco is again having an English language newspaper: The Casablanca Analyst.

Those of you who used to read the online newspaper Morocco Times (and those who didn’t as well) will be able to get news about Morocco in English, but in a different form this time: the newspaper is published on hard copy. The first issue (Year 1, No. 1, May 2007) is already available for sale.

It is probably too early to talk about the paper’s future plans, but I think it would be interesting to consider launching an online version sometime in the future. (During its less than two-year life, Morocco Times received Moroccan and non-Moroccan readers from over 20 countries).

The 16-page Casablanca Analyst is an independent weekly, but is temporarily published once a month. Written in good English (it is launched and managed by two university professors), the paper is made up of many sections: Nation, World, Interview, Opinion, Language and Communication, Literature, Culture and Arts, etc.
My reaction on the new paper might be subjective somehow, especially that I worked one challenging but enjoyable year as a journalist in Morocco Times, and that I sadly saw it agonizing last October. But I think the Casanalyst, as the editors call it on one of its pages, will be successful if it is provided with the needed resources and if it is taken seriously by its managers.
My sincere wishes of a long life and continued success for the new-born newspaper!
Posted by Kaoutar at 11:43 AM 14 comments:

Two twin streams they were
So small but so abundant
Slowly tracing their way
So weak, light and silent

A bit salty they tasted
So clear and also warm
Who do you think they wanted
With their beauty to charm?

Two twin streams they are,
And here will always stay
With each eternal scar
With every happy day

Their name will still be tears.

Here I am back after a few days’ absence! What happened during this one week or so? I worked outside my office for a few days (less routine but more effort), met new people, learned new things (Big World Learner ;)) and … grew one year older :) Yes, My birthday was last Monday, and I am 26! 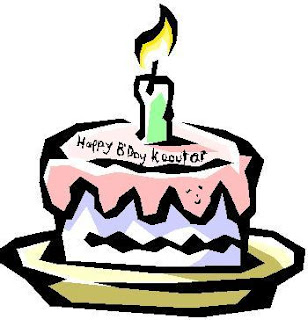 As it fell on a Monday, work attenuated a bit that special aspect of it. But I won’t be ungrateful though. I must say that I was given a VIP attitude that day thanks to the many emails I received and the so many calls on my mobile phone, that of my mother, and the fix telephone at home :D (You know, that importance you feel when you’re already talking on your mobile, and there’s someone asking for you on another :P) I must also say that many caring people made their best to make my day special ;)

Thanks for all those who remembered me no matter how far or busy they were. And thanks for mama who insisted on having me blow the candle out at home (safi, I put only one candle in my birthday cakes now :P) with the presence of some relatives and a friend/sister :)

For those who didn’t know about it, or those who forgot, it’s OK. It’s still time to wish me a happy B’Day :P 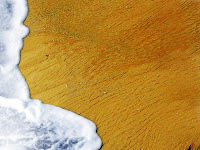 And then there was the sand
Never keeping memory

And then there was the wind
Blowing with joy and misery

And then there were my steps
Phantoms rejecting eternity

And then there was the storm
Heavy leading to maturity

And then there was a mirror
And there on it my face
And like the sand I see
Centuries going by me
But never keeping memory.
Posted by Kaoutar at 9:43 AM 7 comments: