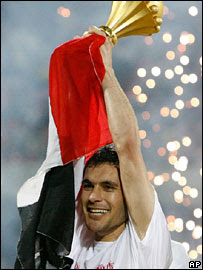 They play fair, they play with devotion, effort and love, and that’s what has made of them the best African football team for the sixth time. The Egyptian football team won the 2008 African Cup of Nations yesterday in , and with it the respect of millions around the world!
Compared to many other teams – and I wouldn’t exclude the Moroccan national team – the Egyptians have proved that mastering the game itself is not the only prerequisite for a squad to become champion. Nor is it the abundance of financial resources. The team spirit that reigns has a real magic effect. Look how respectful they are towards each other and towards their coach and how united they are even in the way they thank God after each goal.
And then look how ruthless they are during the whole match. The way they play makes you feel that they truly care! I am not writing poetry here, but I did see the Egyptian legendary “namoutou namoutou wa ta7ya Masr” (we would die to give life to ) dominating the game during yesterday’s match.
Thinking about all this, I can’t help wondering what’s wrong with the Moroccan national team. What’s wrong can’t be financial. We all know that huge sums are made available to offer our players the best conditions compared to other teams during this cup and any other championship. Nor can the problem be the efficiency of the players themselves. The great majority of Moroccan national team players are part of well known international teams which wouldn’t pay them millions if they’re not real masters of the game.

Then what? has just changed the coach again, a coach who, despite his clear mistakes, has faced us with the painful reality about the management of sports in . Officials criticised Henri Michel’s remarks and dismissed them as utter nonsense, but, on the other hand, didn’t answer that big question haunting all Moroccans: What has made such an ironically renowned team a complete failure! Well if it’s not the money, and not the players, then what can it be except management?!

Anyway there are certainly lessons to be learned from this cup, and there are new challenges coming soon. All I hope is that something will be done –very soon – to avoid our team becoming a specialist in qualifying to international championships and disqualifying from the first round!

Ok, let’s go back to the happiness the Egyptian squad offered us yesterday (and, by the same occasion, smile at the thought that football does succeed in what politics and economy fail to fulfill: creating for real that legendary Arab union whole nations have been dreaming of).

Abu Treka, Zidane, El Hadary, and all their friends, led by “El Me’alem” Shehata, have done a great job, and do deserve the Cup. So hey, enjoy the amazing goal that made the winner of the 2008 African Cup of Nations 1-0 against :

Kisz dear ad mabruk to our egyptian friends! u deserved to have that cup :D

The only thing that should be done is banning morocco from this kind of events.
it will save our tax-payer money
improve our health since we ll be relieved of unnecessary stress
w maghadich nbqaw ntchawho koulla merra

Saba >>> InshaAllah dear. L'équipe dialna will succeed if they solve their internal problems.

By the way our Egyptian friends should share sharbat with us :p

But I can't agree with the solution u've suggested... although I know that u're kidding ;)